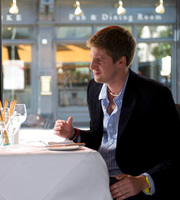 Their company is going down the pan, they're up to their eye balls in debt and Fergus has still decided to turn down the offer of financial help from his sister Jennifer (Lisa Jackson).

If that isn't enough, Crispin's girlfriend Emma (Jessica Gunning) appears to be getting rather close to her friend Lawrence (Brett Goldstein).