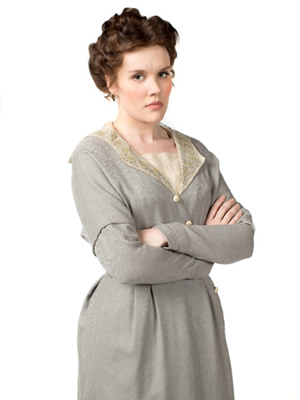 Emerald Fennell stars in Chickens as Agnes, the 'queen bee' of the village...

Hi Emerald. What made you sign up for Chickens?

Everything about it. It was one of the funniest scripts I'd ever seen. Another factor was the 'chickens' themselves, Jonny, Joe and Simon, who are so talented and hilarious. It was a complete no-brainer.

So you get on well with the boys?

It's impossible not to, you'd have to be an evil demon not to enjoy yourself. I literally can't look at Jonny's face because he's so funny [laughs]. They've been friends and writing partners for so long and they have this amazing chemistry between them. It's astonishing to be around them.

Moving on to your character, what can you tell me about Agnes?

Agnes is Cecil's sister and also a slight love interest for Bert - she hates him, but keeps accidentally falling into his arms. She is the queen bee of the village and has completely taken control since the men left. I think she'd probably need anger management counselling these days.

Agnes does need some sort of outlet...

She does and for some reason that outlet seems to be Bert [laughs].

The relationship between brothers and sisters can often be a bit rocky. Have you got any siblings?

I have a sister and we get on like a house on fire, so I couldn't really draw from any of that. Sibling bickering is completely different to bickering with your friends or boyfriend, though, and what I love about mine and Simon's scenes is how, within a matter of seconds, we switch from being two sensible grown-ups to horrible, vicious, childish toddlers.

That must be so much fun to play though?

It is, because, of course, in real life one hopes to be very measured and polite at all times [laughs].

Cecil, George and Bert are labelled as cowards in the show. When was the last time you chickened out of something?

Oh, gosh. I went on holiday with a friend and she organised a surprise white water rafting trip. I'm a bit nervous of that kind of thing, but I thought, yeah, I'm definitely going to do it. There was a ledge that led out into the water and you had to kind of jump down it, usually I'm fairly gung-ho, but I couldn't do it. I was the only person out of 20 who refused. 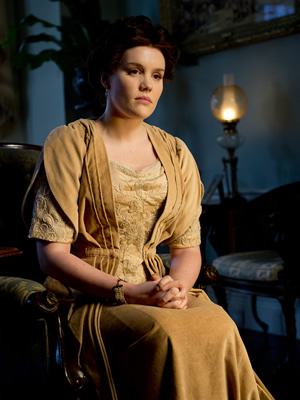 Well, one of them hit their head and got concussion so, no, I didn't regret it, I was actually quite smug [laughs].

Have you ever done anything particularly brave?

I can't think of anything off the top of my head - isn't that terrible? I wish I could say I saved a baby from a burning building. One of my best friends won a bravery award when we were at Oxford University and, when he went to pick up his medal, the person who had won the award above his was a dog that had rescued a child from a burning building.

Going back to your roots, what inspired you to get into acting in the first place?

I was one of those exhausting children, a terrible exhibitionist always putting on plays. I think acting is one of those things you feel you have to do, and what I like so much about it is that you're part of a team with so many amazing people.

Is there anyone you particularly look up to in the industry?

Miranda Richardson is my absolute top. Then there's Olivia Colman, someone who does comedy and drama; such an intelligent, beautiful, warm performer. And Julia Davis as well. There are some incredible women in this country, particularly writers.

You've branched out into writing children's literature and recently published Shiverton Hall. Have you got any plans to write a TV series or anything along those lines?

Absolutely. I loved doing Shiverton Hall, the sequel is coming out next summer and the TV rights have just been bought.

Thank you so much. There are a lot of comedy bits and bobs that I'm developing, but obviously I'll take what I can get [laughs].

Is there anything you are absolutely terrible at?

My hand-eye co-ordination leaves a lot to be desired and, at school, I was so bad at sports that my teacher gave up and gave me a tennis ball to throw against the wall. I was so pathetic. I'm so bad at maths and most grown-up, useful skills - it took me seven attempts to pass my driving test.