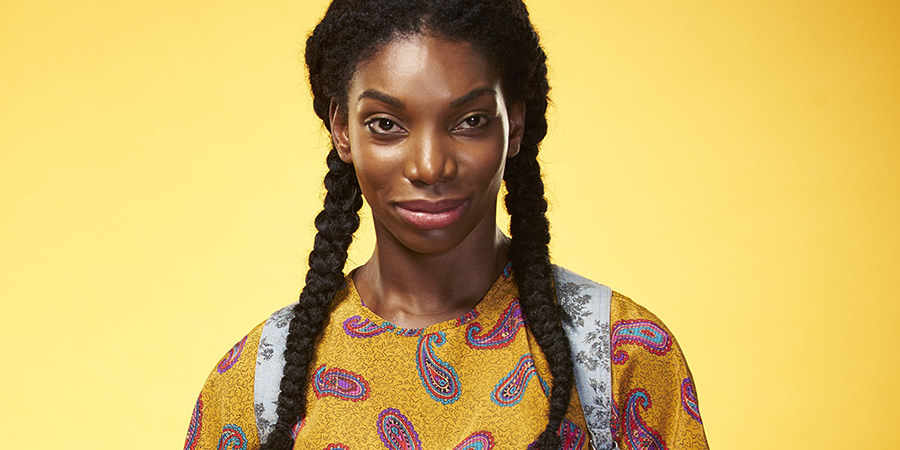 Comedy starring singer, poet and award-winning playwright Michaela Coel as an innocent 22 year-old who is learning to grow up

In Chewing Gum, Michaela Coel plays Tracey Gordon, a religious Beyoncé-obsessed 22-year-old who is fast finding out that the more she learns about the world, the less she understands.

Tracey and her mates are in their early twenties, living in an estate in Tower Hamlets, east London. Some of them have full time jobs, some are in uni, some are already parents. But really - they are all stuck. Stuck in their youth and still trying to coast through their days with minimum responsibility. Future plans don't extend much beyond saving up for the latest pair of trainers, a new car, or a Cambodian Weave. They live in the moment.

Tracey, however, seems capable of more. But growing up in a strict religious environment means she is 'underdeveloped' in many areas, and so her path into adulthood has been... interesting. She is wise, but innocent, genuflecting equally to both her idols - Beyoncé and Jesus. Living in a swiftly changing London, we watch as she crashes her way through what she should and shouldn't be doing.

As the second series begins, Tracey's return to the Pensbourne Estate doesn't quite go as she would have liked. Best friend Candice isn't happy to see her and mum Joy won't let her in. But at least she's back at work at Deepak's Delectables. Tracey discovers ex-boyfriend Connor's got a new relationship, and ropes Ola into helping her convince Connor she has moved on. Connor meanwhile tells a few lies of his own in order to get Tracey to talk about what actually happened between them.