Filmed at the world famous O2, Channel 4's Comedy Gala sees the cream of the UK's comedy crop come together for one rip-roaring comedy night all in aid of Great Ormond Street Hospital.

This comedy spectacle of 2013 includes 22 of the biggest names in TV and comedy along with...

On Friday May 11th 2012, Jessie J and more than 25 of the nation's best known and most loved comedians and TV stars came together for the UK's biggest stand-up show ever.

For the third year running they performed at this exclusive comedy event in aid of Great Ormond Street... 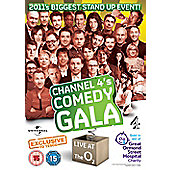 Sold exclusively in Tesco, this is the 2011 comedy extravaganza presented by Channel 4 on Tuesday 24th May 2011 at London's massive O2 Arena, in aid of Great Ormond Street Hospital for Children.

The profits from this DVD go...