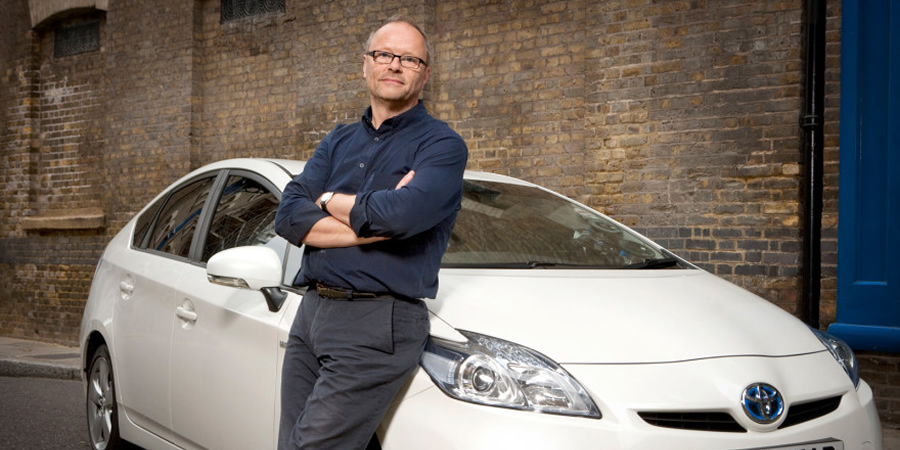 One man, one car and a guest list to die for - Carpool has become an online phenomenon. Channel Dave is now bringing Robert Llewellyn's internet chat show to a TV audience and Carpool making it television's most intimate and off-the-wall chat show.

The overall approach to the show remains the same as the online version: guests are given a lift to a location of their choosing by Llewellyn in his car, with the conversations on the way informal and meandering.

The show first started in 2009 when Robert Llewellyn decided to try his hand a presenting a chat show, but without finances to hire a studio or pay exorbitant appearance fees, he came up with a unique idea - he would offer his prospective guests a lift in his own car - in return they would allow him to film the conversations that unravelled along the way. Robert got to work with modern mini cams and radio microphones and Carpool was born.

In the early days, the host relied upon his contacts from the world of comedy and entertainment. Guests included Ruby Wax, Nigel Planer, David Baddiel, Craig Charles and Jo Brand. Once filmed, Robert edited the videos himself at home and then posted them on his website.

Carpool hit a chord with the online community who viewed the early shows in their thousands and without any press or PR, Robert built a loyal fanbase. As a result Robert was able to secure big names for the show such as Stephen Fry, Jonathan Ross, Patrick Stewart and David Mitchell.

The Carpool formula is simple - planning is kept to a minimum and no subject matter is off limits. The relaxed approach has proved to be a winner - since being available on iTunes Carpool has had over 2 million downloads.

Robert Llewellyn says: "I started Carpool 18 months ago as an experiment. A sort of talk show recorded in a car as I drive busy people to meetings, events, gigs or just down the shops. The real joy is that people talk openly and intimately and it's not only funny but a real insight into the interviewees. It's been downloaded over 2 million times through iTunes and for many weeks was in the iTunes top 10 podcasts. Carpool takes the talk show format and stows it in the boot while the real talking takes place up front and I'm really excited to be bringing the show to Dave viewers".

The show will be funded by Toyota. Producer Dominic Bowles says: "Having started as an online project before transferring to mainstream TV with the help of a commercial funding partner, Carpool is in many respects a case study for modern TV production. That said, matching a great host with top guests is a policy that has been serving producers proud for decades, we're just going to do it in a car!"