The embassy is thrown into chaos by the arrival of British trade envoy and minor royal Prince Mark of Bath and Tazbek dissident Amil Zarifi who seeks sanctuary in the embassy having escaped house arrest.
Preview clip 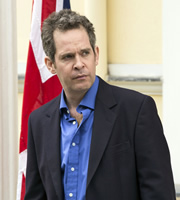 Minor royal Prince Mark of Bath has been invited to Tazbekistan in his capacity as trade envoy to help the embassy win lucrative drilling licenses for AngloBritish Oil.

With an unshakeable sense of entitlement and utter disregard for the sensitivities of others, Prince Mark soon makes himself unpopular with his exacting demands for luxurious accommodation and high-level service, which far outstrip what Ambassador Davis and his wife Jennifer can provide at the embassy residence.

The Prince's arrival coincides with the escape of one of Tazbekistan's most celebrated and outspoken dissidents, Amil Zarifi, who asks for sanctuary in the embassy. Unable to contact the ambassador, who is tied up managing Prince Mark, Deputy Head of Mission Neil takes the decision to bring Zarifi into the compound - a decision which not only incenses his boss but also infuriates the Tazbeks, who demand the British give up the dissident immediately.

With hopes of securing the oil licenses hanging by a thread, the embassy must rely on the man least likely to improve relations between Britain and Tazbekistan: Prince Mark.

Prince Mark is reminded about his royal visit to Tazbekistan.