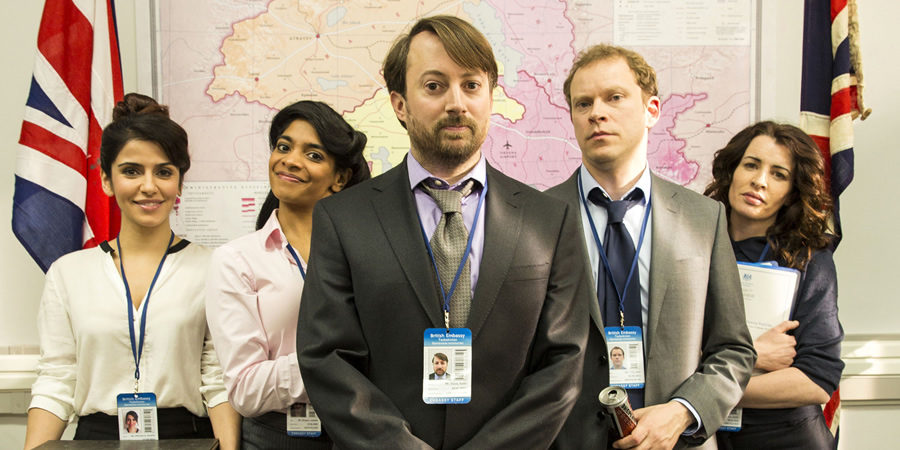 Any country that isn't pursuing its interests in the world has lost its way. Britain hasn't lost its way yet, has it? That's why we have an impressive global network of Embassies run by hard working diplomats. To secure our interests. And to help tourists who've fallen off their mopeds or lost 'everything'.

Keith Davis (David Mitchell) is the newly appointed British Ambassador of Tazbekistan, one of the ex-Soviet 'Stans': newly oil rich, corrupt and ruled over by President Kairat (aka The Prez). Davis is ambitious and fancies himself in Washington or Beijing. He intends to make his mark in this posting. Though well aware that one major diplomatic event can make - or break - a career.

Standing beside him is Neil Tilly, Deputy Head of Mission (Robert Webb). A Central Asian expert, fluent in the language and romantic about the region. Neil's job is to put the Ambassador's plans into action. While Davis is out representing Britain, Neil is in the Embassy pulling the levers and managing the staff.

The Embassy team are a small but appealing gang - a mixture of Brits and locals who regularly flirt or fight with each other. They are all trying to advance British prosperity and values, despite an ever-decreasing budget. But it's not easy to convince the local Dictator to give UK plc a major helicopter contract - while also criticising him for his appalling human rights record. And almost as tricky are other embassies - the French and Americans are big players here - sometimes they are allies, sometimes rivals. Sometimes they are both, simultaneously.

And all this compounds the tendency for embassies to become hotbeds for lust and rivalry.

There's Caitlin - the no-messing Scottish Head of Consular Affairs. She knows from painful experience there's nothing so stupid that a British tourist won't try it. Natalie - Head of Communications - a beautiful local employee (LE) who understands the Tazbek minds, but doesn't understand why the British don't take better pride in how they dress. And William (Will) - Political Secretary. Super smart Will is clearly going all the way. He'd like to go 'all the way' with Natalie too.

"Diplomacy is a case of indicating left - then turning right." Charles de Gaulle

The additional presence of wives, husbands and children means that diplomacy is also a family business. The Residence is in the same compound as the Embassy - the 'flat above the shop.' And it's a tough posting. Tazbekistan is not a country wives, husbands or children tend to rush to. Unless they like cheap carpets, ex-Soviet plumbing and Human Rights abuses. And the Residence itself is that uniquely Tazbek combination: unfinished and yet already decaying.

Jennifer Davis - The Ambassador's long-suffering wife - has an impressive career as a doctor she wants to pursue. Instead, she spends a lot of time talking to tedious men from the EU, or local despots, while also making sure that - against the odds - they all get a nice British dinner. That's not easy given the resources in Tazbekistan. This place is far more survival course than holiday jaunt. Our diplomat heroes are far more likely to be drinking lethal vodka in the President's hunting yurt than having G&Ts on the lawn.

And none of them have seen a Ferrero Rocher for years...

David Mitchell says: "There comes a time in the life of every youngish actor when he knows he will never play James Bond. This is not that time. We're still holding out for that, but Ambassadors might be good to practice on."

Kenton Allen, Chief Executive of Big Talk Productions, says: "We're thrilled to announce our first Mitchell and Webb commission, launched with the brilliant writing of James Wood and Rupert Walters. It was always our ambition to move David and Robert into a 60-minute comedy drama so this is a wonderful start to our adventures together." 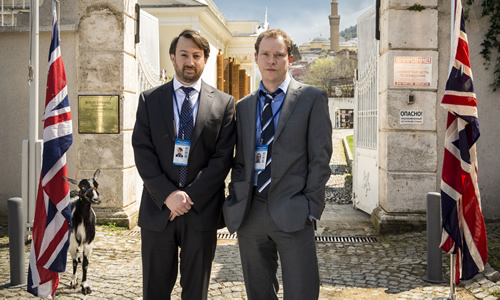