Freshly rehabilitated, the Old Doctor is attacked aboard a train for his morphine addiction. In 1918, the Young Doctor falls in love with a beautiful aristocrat. 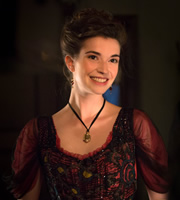 The Old Doctor is on a train when his notebook is suddenly thrown at his head by Vlas, a fellow traveller, who tells him he hates morphine addicts. The Doctor replies that there's more to the notebook's author than morphine, before realising how many pages have been used for toilet paper.

Meanwhile, the Young Doctor is shambolically attempting to replace the morphine that has been taken by the now departed Bolshevik soldiers.

The following day, the White Guard arrive at the hospital, asking for medical assistance for a particularly badly wounded soldier. The Young Doctor meets the soldier's sister Natasha, a beautiful aristocrat who insists all the staff join the White Guard for dinner.

After accidentally shooting himself in the foot, the Young Doctor ends his relationship with Pelageya and confesses his feelings to Natasha, but she reveals she is betrothed.