Max Boyce is to publish his first book of stories, songs and poems for more than 40 years.

The Welsh comedian and singer is to release Max: Hymns & Arias - The Selected Stories, Songs and Poems of Max Boyce in September through Parthian Books. 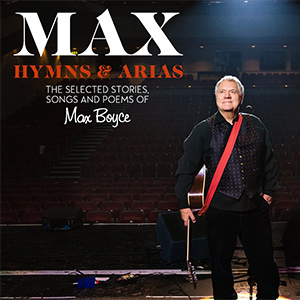 Described as "the definitive selected work" of a "national treasure", the book features material set down in print for the first time and spans Boyce's entire career, from the song of the title, which became a Welsh rugby anthem, to his coronavirus poem When Just The Tide Went Out, which went viral last year.

The 77-year-old entertainer began on the folk circuit in the early 1970s, establishing a cult following in Wales with his live albums of comic and traditional tunes, before crossing over to a wider fanbase with his third album, 1974's Live at Treorchy, which went gold.

The following year he released another live album, We All Had Doctor's Papers, which retains the distinction of being the only comedy album to top the UK album chart, and which was followed by further gold records.

Boyce also pre-empted the comedian travelogue trend, making two Channel 4 series in the US, where he trained with the Dallas Cowboys American football team and rodeo riders.

Competing in elephant polo in Nepal for what became the 1986 film To The North Of Kathmandu, his team, featuring Billy Connolly, Ringo Starr and Bond girl Barbara Bach, scored only one goal in the entire tournament.

Promising to capture Boyce's "inimitable humour, uniquely Welsh pathos and masterful wordcraft [that] has defined a nation and its people for more than half a century", Hymns & Arias is his first book since 1987's travelogue companion, Max Boyce in the Mad Pursuit of Applause, and his first compilation of material since 1976's Max Boyce: His Songs and Poems and its 1979 follow-up, I Was There!.

Last month it was announced that plans to erect a lifelike bronze sculpture of Boyce in the town of Glynneath have been approved.

Few entertainers epitomise the term 'national treasure' like Max Boyce. From his humble early years touring the clubs of his native south Wales, to his sell-out performances before thousands at some of the world's most iconic venues, to British prime-time stardom, Max has firmly cemented himself as one of these shores' most endearing comedians and singers.

A multitalented, charismatic artist, his words, infused with Welsh lifeblood - mining, Valleys community life, rugby union - have lost none of their potency, and continue to echo around pubs and stadium terraces to this day.

Compiling - in some instances for the first time in print - the very best songs, poems and stories from across his celebrated career, Max: Hymns & Arias - The Selected Stories, Songs and Poems of Max Boyce is the definitive selected work of a major cultural figure, who through his inimitable humour, uniquely Welsh pathos and masterful wordcraft has defined a nation and its people for more than half a century.