Helen Zaltzman and Olly Mann present an alternative review of the year by dishing out their expense-spared awards to the cream of weblebrity from the past twelve months. 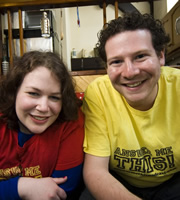 Who has the internet turned into a star this year? Who has it humiliated? Which headline story couldn't have happened with the web? Who's this year's internet villain? What's Twitter all about and who tweets the most? Podcasters and internet obsessives Helen Zaltzman and Olly Mann celebrate the greatest, funniest, influential, most infectious and cringe-worthiest online events of the year.

The glamour, the tears, the triumph, the paparazzi, the huge after-parties - we'll have none of these, but we have two presenters who are the toast of the web celebrating the medium that made them.