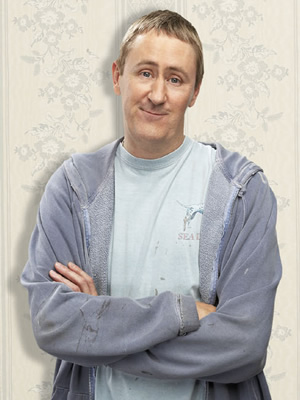 Sitcom star Nicholas Lyndhurst has signed up to appear in a new comedy series for Radio 4.

My First Planet is set at a newly-founded space colony; unfortunately, the would-be leader of the colony died en route from Earth, leaving his Number 2, Brian (Lyndhurst), in charge.

The new four part comedy series has been written by Phil Whelans (The Jason Byrne Show, Grand Theft Impro) and is being made by David Tyler of Pozzitive Productions, the producer and company behind series such as Another Case Of Milton Jones, Bigipedia, Jo Caulfield Won't Shut Up! and The Castle.

Pozzitive describe the series: "Brian's a nice enough chap, but no alpha male, and his desire to sort things out with a nice friendly meeting infuriates the colony's Senior Medical Officer Lillian, who'd really rather everyone was walking round in tight colour-coded tunics and saluting each other. She's also in charge of the plan to conceive and give birth to the first colony-born baby. Unfortunately, the two people hand-picked for this purpose were fibbing about being a couple, just to get on the trip.

"Add in an entirely unscrupulous Chief Scientist, Mason and idiot maintenance man Archer, who believes he's an 'empath' rather than a plumber, and you're all set to answer the question - if humankind were to colonise space, is it destined to succumb to self-interest, prejudice and infighting? (By the way, the answer's 'yes'. Sorry.)"

Other members of the cast include Tom Goodman-Hill as Mason, Whelans as Archer, plus Cariad Lloyd and John Dorney.

The series will be recorded at The RADA Studios, formerly The Drill Hall, on Sundays 18th March and 15 April 2012.