The prestigious Leicester Mercury Comedian Of The Year new act competition is to be broadcast live on the radio for the first time.

The news was included in the announcement that national digital radio station Union JACK has signed up to be one of the sponsors of the Leicester Comedy Festival 2019.

Union JACK, which can be heard on digital radio across the UK, will broadcast the Leicester Mercury Comedian of the Year competition live on Saturday 23 February 2019 from 7.30pm.

The comedians confirmed to perform in this year's final are:

Union JACK radio will also broadcast live from Circuit Breakers 2019 - a programme which supports new and emerging comedy acts, providing a supportive place for them to perform and develop their network and contacts. Chris Copestake, George Edgeller, Nena Edwards, Joe Hobbs, Hannah Platt and Carla Pol will perform on Saturday 16th February, with the output able to be heard "almost as-it-happens" on Union JACK from 7pm.

Ian Walker, CEO at Union JACK, says: "As a radio station that celebrates the very best of British comedy and music, we are delighted to be supporting Leicester Comedy Festival 2019.

"Union JACK has created a home for comedy on the radio, where listeners can enjoy established acts and new talent, alongside classic comedy and original content. This partnership reinforces our position as the only commercial radio station to provide such a strong editorial commitment to comedy, and we're excited to bring our listeners the opportunity to enjoy live performances from one of the greatest comedy festivals in the world."

Geoff Rowe, Director of Leicester Comedy Festival, comments: "We're thrilled to be working with the team at Union JACK radio to extend the reach of the festival and allow more people from across the UK to experience the biggest comedy festival in Europe. Leicester Comedy Festival has always been a place where new and emerging acts perform alongside the biggest names in comedy. Newer acts visit the festival to develop their material and shows in front of hugely comedy savvy audiences, and now more and more people will be able to enjoy the festival from the comfort of their own homes.

"Over the past 25 years we have supported hundreds of new comedians, as well as exclusive and one-off shows from some of the biggest names in comedy. We're hugely proud of our commitment to new talent and our competitions, and the Leicester Mercury Comedian of the Year Competition and Circuit Breakers showcase will hopefully continue to provide a helping hand to comedians. The acts taking part are amongst the cream of the crop of British live comedy and help demonstrate the strength of the comedy circuit."

Leicester Comedy Festival takes place from the 6 - 24 February 2019, featuring a record number of shows and events which are to be staged at over 70 venues in Leicester. Find out more at comedy-festival.co.uk

Union JACK is available across the UK on digital radio, online at unionjack.co.uk and via the Union JACK app.

Leicester Mercury Comedian Of The Year 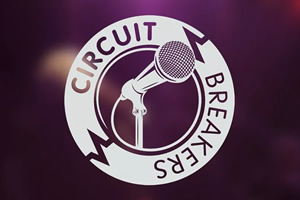