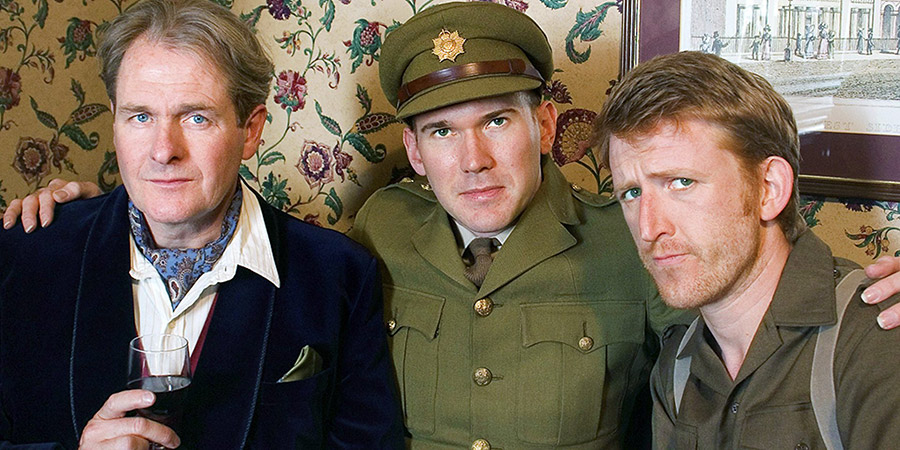 Radio sitcom set in Bletchley Park in 1941, about code-breakers who are forced to share a draughty wooden hut

Set during world war two, Hut 33 follows the adventures of a team of codebreakers at Bletchley Park. The three code-breakers are forced to share a draughty wooden hut as they try to break German ciphers. Unfortunately, as they come from different backgrounds, they don't get along.

Archie is a stroppy Geordie who wants a socialist revolution, Charles meanwhile is an ultra-conservative snob from a posh background. Also in the hut is child prodigy Gordon and, sometimes, the very silent Winstanley (we only know the latter exists as the other characters occasionally remark about his odd behaviour).

In theory, 3rd Lieutenant Joshua Fanshawe-Marshall is in charge of the hut, but he is so dim he struggles to exercise any authority. In fact, Joshua is still struggling with even the most basic concepts like his name, let alone fiendishly complex German ciphers.

There's also Mrs Best, their lascivious landlady who is on the prowl for a man (or men!), and the hut's Polish secretary Minka, the one competent member of the team - although her answer to everything unfortunately involves violence!

In the latest series, Series Three, it's 1942 and things are looking grim for the Allies and even worse for Hut 33, who remain the worst performing hut at the secret code-breaking facility at Bletchley.

Perhaps if Charles and Archie stopped feuding and Gordon could concentrate on his number sequences instead of acting as peace-maker they would make better progress.

Highlights from Series 3 include an attempt by the codebreakers to think their way into the minds of their German counterparts by immersing themselves in German culture; unfortunately, impressionable Gordon takes things too far. Charles is threatened with internment because of his German relatives; to impress a lady, Archie volunteers the hut for a dangerous mission over France; Gordon invents a new form of computing device to help them break codes; and their luck runs out when they are forced to move into Hut 12.