In 2009, my friend Deborah Frances-White sent me a copy of a screenplay called "Say My Name". It was written to take place in the U.S. and she wanted feedback to make sure it felt appropriately American. I immediately wanted to direct it. The script, even its earliest draft, was witty, surprising, and doable on a small budget. Deborah was already committed to a production company, however, and over the years the script moved from company to company, from director to director.

In 2016, my friend Lisa Brenner, who I had directed in my first play back in college, was looking to come up with a project we could do together. She had grown tired of being at the mercy of the industry to tell her what kinds of parts she could play, and she wanted to produce something of her own.

Lisa was smitten by the script (who wouldn't be?) and knew that Mary was a role she needed to play. The latest version of the script was set in the UK, and Lisa loved that element, and we thought that making Mary a foreigner would be an interesting touch as well.

So, remarkably quickly, we were off to Wales, and joining us was my long-time Director of Photography Alan McIntyre Smith. So my old friends Lisa, Deborah, Alan and I found ourselves living in the glorious Welsh countryside together, making a movie.

There was definitely a bit of culture shock once we got to Wales. For a place such a relatively small geographical distance from London, Wales is most definitely another country, and they'll pointedly remind you about that should you suggest otherwise. But for a director going to the countryside from a major world city, any preconceptions I had about finding adequate local talent was quickly forgotten. We made a point of casting a significant portion of the roles locally, and the wealth of actors in Wales was remarkable. I don't think we had a single bad audition. The actors we saw had so much personality and skill, we could have written a new movie and cast all of them.

Not to mention the crew. Coming from the rough-and-tumble indie world of micro-budget filmmaking that relies on low-level industry pros doing you a favour or precocious film students stepping up, I was in constant awe of the Welsh crew and production team. Of course they're remarkably seasoned - there is so much production in Wales, from Doctor Who to Casualty to His Dark Materials, and so, so much more. Since most of the crews work on television series or big budget Hollywood movies, it's rare for them to work on a quick indie where individual creativity isn't just welcomed, it's demanded in order to produce a superior film. These pros threw themselves into the film with a passion I wouldn't necessarily expect on a not-particularly-high-paid indie. Nic Ede, our accomplished costume designer, said that the shoot reminded him of working on British indies in the 1980s, which, to me, who grew up on these films, was quite the complement.

And there was an alchemy in having a top team of British pros combined with producing leadership from Los Angeles and my and Alan's scrappy indie NYC ethos. We had the support and experience to create a relaxed but ever-focused atmosphere on set. We shot the film in just three weeks, which everyone seems to think was nuts, but at the time, sure, it was hard work, but not punishing. We had fun. The set was playful and efficient, and we were getting what we wanted on camera. For Alan and I, it was a first time not having to worry about the logisitics, for Lisa it was the first time to be able to call the shots, and for the British crew it was a fun break from the normal big budget machine.

And I have to mention the cast, which was always game, and bringing their best to this project: Nick Blood, Celyn Jones, Mark Bonnar, Peter Davison, Melanie Walters... I have to actually stop myself from listing each and every single name. Check out our BCG page and hire them all. Deborah wrote an ensemble picture, where even the smallest character has a distinct voice, and the cast did feel a bit like its own acting company by the time we were done shooting.

Also, we did something not often done in bigger budget filmmaking - we invited the writer to the set. I felt strongly that Deborah, who had had so many films optioned but not made, should be able to observe and learn from the experience, and also be able to contribute to the production. Time and again she'd tweak lines or offer alternative script suggestions as shooting progressed, and even delivered occasional whispers in my ear about a woman's perspective in certain scenes or places where she thought I might be missing a laugh.

And the international nature of the film was a lot of fun. We did our first round of post production in New York (with another old friend, the remarkable film and TV editor Kyle Gilman), our second in Los Angeles, and then culminated with a gala premiere at the Leicester Square Odeon in London, where friends old and new packed the house.

I'm thrilled that this film is finally reaching British audiences, and I hope to be back in Wales on a new project someday. Sequel, anyone?

Say My Name is now available to watch on demand. 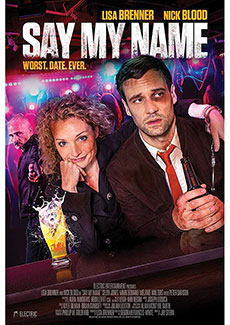 When a one-night stand gets interrupted by a robbery, two complete strangers are forced to navigate the seedy underbelly of a sleepy Welsh isle in order to get back their stolen property. Along the way, their opposing personalities and differing outlooks on life bring them to a boiling point.

This independent romantic comedy, written by comedian and podcaster Deborah Frances-White (The Guilty Feminist) and directed by Jay Stern, invites viewers along on the duo's night of unwanted self-discovery, that will have the couple either hating or loving each other by the morning.