How did you first meet, and start working together?

Everybody always asks us this and we should really have invented a funnier answer for it by now, but the truth is we met on the shoot of a truly awful low-budget feature film.

Johnny was doing the sound and Pier had been unwillingly promoted from runner to 1st AD, which gives you the measure of the production. Especially if you know Pier.

The script was so poor that we were convinced we could do better, and so we started meeting up and brainstorming ideas. And thus the legend began.

You've been working a fair bit in the world of commercials, including creating some adverts we've probably all seen. Is it hard to be creative in that world?

Firstly, we apologise for the adverts you've seen.

Secondly, it's different being creative in that world. You get a lot less autonomy, some of the key decisions have already been made, and you're often working within a very narrow set of parameters. However, within that framework there is definitely an expectation for directors to be creative and passionate, and often you can find a way to stamp a project with a unique look or comic tone.

Agreeing on the appropriate sense of humour is definitely key, and gently nudging the client out of their comfort zone is a big part of how we spend our time. But it helps that commercials usually have a little more time and money for the shoot, so sometimes you can get it their way, then get something funny as well... and have a good old barney about it in the edit.

What do you think makes a good director?

Pier: The ability to collaborate.

Big Red Button: That's a really difficult question to answer, but collaboration is a really important part of it. Being a duo, that's naturally hard-wired into our projects, but knowing when to step back and let your production designer run with an idea, or giving your DOP the opportunity to play, usually makes for a much stronger piece of work in the end.

The director is often one of the least experienced people on set in terms of how many shoots they have under their belt, and taking the time to listen to the suggestions from performers, crew-members and the unit medic can really throw up some great ideas, or at least help stem the bleeding.

We don't really have a clear division of who does what, and both of us stick our oars in at every stage of a project. But there are surprisingly few disagreements. Maybe it's because we've been working together so long (about 15 years now) or maybe it's just that one of us has been phoning it in this whole time, but for whatever reason we're usually aligned on things.

We take a lot of time in pre-production getting on the same page about things so that neither of us ends up throwing a wobbly on set.

You presumably can't agree on every single thing. How do you resolve differences between yourselves?

We usually just talk them through, and whoever feels more passionately about something usually convinces the other. But on the rare occasions when we're diametrically opposed, a staring contest usually sorts the men from the boys.

Tell us about your latest project, La Princesa de Woking...

It's a 1980's Mexican telenovela set in Woking in 2020. Big plot twists, big acting, big hair and shitty cul-de-sacs. It's written by and stars the amazing Emma Sidi, who developed the show from her successful 2016 Edinburgh show Telenovela.

How much effort did you have to put into making it look like that on screen?

A lot of thought went into how we could make it look as authentic as possible. We thought it would be really cool if someone happened across it on YouTube and wouldn't be able to tell if it was for real or not.

We found these old Ikigami video cameras from back in the day which would give you wicked green traces when you panned past a light, and the image changed colour as they gradually heated up (until they stopped giving you an image at all).

We also put a lot of attention to detail into the production design and styling. And then we got all the actors to play it straight, which tied the whole thing together. 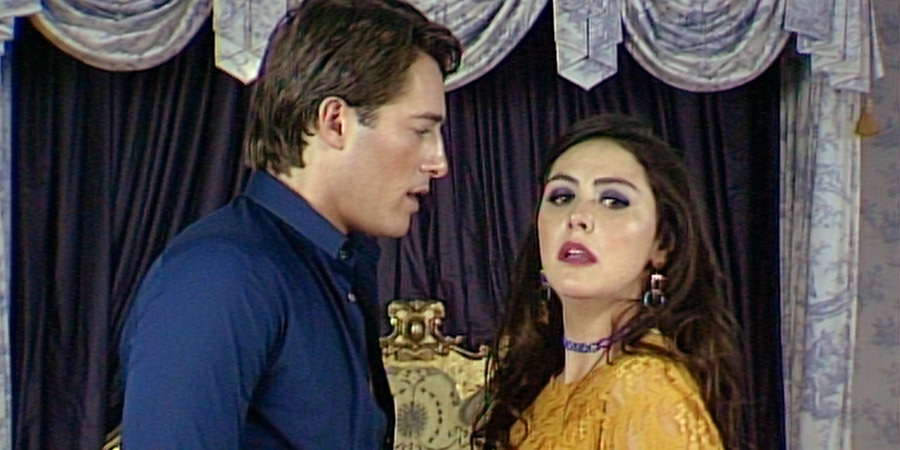 Working with Emma was awesome and very collaborative. She'd written a brilliantly funny script so we mainly focussed on the execution and additional ideas for visual jokes. We wrote a treatment for how we thought the final thing should look and feel and fortunately Emma was completely on board.

Once we'd agreed the comic rules of the universe together, it felt like anyone was free to make suggestions and lots of great additional ideas were fed in by heads of department, cast and crew.

This is billed as a pilot, so presumably you're hoping/planning to make more?

We would all love to make more, and Emma has mapped out a hilarious series arc that involves her various family members scheming to rob her of her money while her dad stands as the regional UKIP representative. Although we'll have to write in some scenes in the Woking Pizza Express now too... If you too would like to see more, please send a blank cheque to Big Red Button, PO Box 75733, London, E17 0TY.

Find out more about Big Red Button via bigredbutton.tv