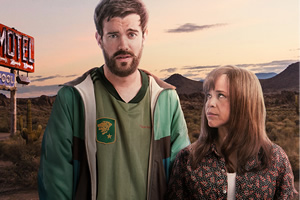 Some of those involved in Series 2 of Bounty Hunters talks about the return of the comedy thriller. Everyone was thrilled to have Steve Pemberton join the cast. 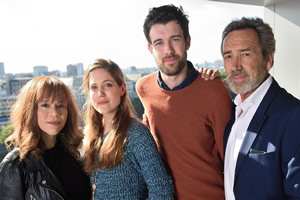 Bounty Hunters to return for Series 2

Sky One has ordered a second series of Jack Whitehall's comedy-thriller Bounty Hunters.

Bounty Hunters is a big ratings hit for Sky

The first episode of the Sky One series attracted a cumulative audience of 1.377 million, making it the biggest sitcom launch on Sky One for six years.

Bounty Hunters, Jack Whitehall's crime/revenge fantasy, is grand fun. There's an obvious yet still delicious frisson to be had in the juxtaposition of Rosie Perez's angry Nuyorican finding herself in Wimbledon with Whitehall, his tiny electric car and his PhD in Flemish tapestry: much class war, some laughs, more missed chances.

Rosie Perez can't save this odd-couple comedy-drama, co-starring (and co-written by) the overexposed Jack Whitehall.

We'll see if Whitehall and Perez's combined forces of personality can sustain the already stretched story over another five episodes.

Some of the issues are surely down to the establishing work the first episode has to do. So it's a good sign that after it airs you'll want to see what happens in part two. On that score, at least, job done.

The Jack Whitehall quest for global domination continues with his new comedy-thriller in which he plays bookish boffin Barnaby who unwittingly gets sucked into the violent criminal underworld.