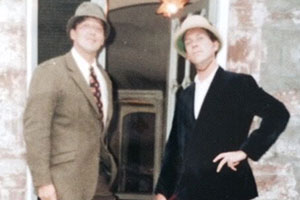 The Hows & The Whys & The D'you-Mind-If-I-Don'ts of the Fry & Laurie Archive, by their official biographer, Jem Roberts. 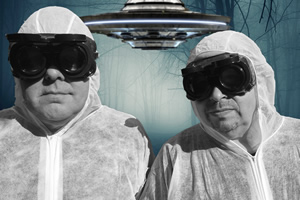 A Bit Of Fry & Laurie blog:

Sunday January 13, at 9pm, marks the 30th anniversary to the minute of the very first broadcast of series one, episode one of A Bit Of Fry & Laurie.

He deserves all the more praise then for shedding new light on them - and uncovering and reproducing many new unused A Bit of Fry and Laurie scripts - in this fresh, thoroughly enjoyable and engaging biography of Britain's brightest ever comedy partnership.

The Hitchhiker's Guide To The Galaxy news:

The Hitchhiker's Guide To The Galaxy is to be released on vinyl for the first time.

Previously un-seen Fry & Laurie scripts are to be published in Soupy Twists!, a new book about the work of Stephen Fry and Hugh Laurie.

The Hitchhiker's Guide To The Galaxy review:

It is a shock to realise Douglas Adams would be barely into his sixties if he were alive even now. This is a fitting tribute to a giant of comic literature, taken from us far too early.

In the 13 years since he died, Douglas Adams' fictional universe has lost none of its appeal. His biographer Jem Roberts explains how he came to tell his story - and the treasures he found.