January, 2017.
James Acaster wakes hungover and alone in New York, his girlfriend having just left him. Thinking this is his rock bottom, little does James know that by the end of the year he will have befouled himself in a Los Angeles steakhouse and disrespected a pensioner on television.

Luckily, there is one thing he can rely on for comfort - music. In true Acaster fashion, this ends up with a completely unnecessary mission: to buy as much music as he can released in 2016, the year before everything went wrong (for James, at least). Some albums are life-changing masterpieces, others are Howdilly Doodilly by Okilly Dokilly, a metalcore album devoted to The Simpsons character Ned Flanders. But all of them play a part in the year that James gets his life back on track.

In Perfect Sound Whatever, James takes us through the music of 2016, the bullshit of 2017, and how the beauty of one defeated the ugliness of the other. He will also reveal how he stole a cookie from Clint Eastwood and attempted to complete his musical odyssey by reforming one of Kettering's most overlooked bands. 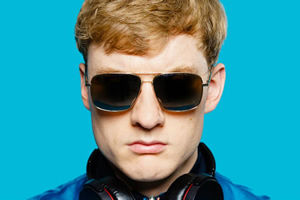 James Acaster is to release his second book this summer. Perfect Sound Whatever will focus on his obsession with buying music released in 2016.