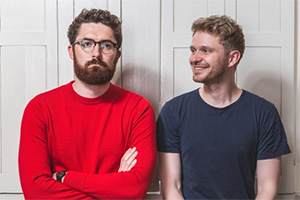 The Pin on their Special Relationship, Jurassic Park and making their West End debut

Comedy duo The Pin discuss their Audible sitcom, their West End ambitions and appearing in the new Jurassic Park film.

Sketch duo The Pin are to make their West End debut this Christmas with their first play, The Comeback.

Pin sharp: interview with The Pin

Dominic Maxwell talks to the double act behind The Pin, the lockdown sensation heading for the theatre.

The Pin to star in Audible comedy series

Audible is launching scripted mockumentary The Special Relationship from UK comedy duo Alexander Owen and Ben Ashenden (aka The Pin).

The name of this double act is well chosen. Ben Ashenden and Alex Owen deal in sharp routines that leave their mark.

We asked some of the comedians at the Fringe, 'If you had a gun with one bullet in it, what would you do?'... We thought this was a smart question, but comedy duo The Pin have undermined it.

The Pin pick their Perfect Playlist

The cast of Pin on their new comedy show, Backstage.