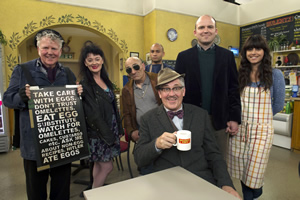 Count Arthur Strong creator and star Steve Delaney, and co-writer and director Graham Linehan, talk about the sitcom returning to television for a third series...

The IT Crowd news:

Linehan won't work with C4 unless they show IT Crowd ep

Graham Linehan says that he won't work with Channel 4 again until they "reinstate" a transphobic episode of The IT Crowd. The Irish writer, who also created Father Ted and Black Books, wrote the season three episode "The Speech", which is currently unable to stream on Channel 4's website.

Alexander Armstrong and Ben Miller, previously a comedy double-act, were among more than 50 public figures and anti-trans campaigners who signed the letter published in The Sunday Times, which condemns the "insidious, authoritarian and misogynistic" opposition to JK Rowling on social media. Other people in the world of comedy who signed the letter include Graham Linehan, Arthur Mathews, Griff Rhys Jones, Craig Brown, Francis Wheen, Jimmy Mulville, Frances Barber and James Dreyfus.

He's the creator of some of our most treasured sitcoms, but he's also now 'the most hated man on the internet'. Has it all been worth it?

Do you - like the overwhelming majority of people - believe that men aren't women, that biological sex is real? Well then, you better keep it to yourself, on Twitter anyway.

Last week, the Father Ted co-creator briefly lost his blue tick verification after several of his tweets accusing an LGBTQ+ group of grooming were reported; however, he later regained his verification and a Twitter spokesperson said he had been unverified in error. But now, Linehan's @glinner account appears to have been suspended entirely.

This year marks twenty-five years of Father Ted, so what better way to commemorate this milestone than to take a look back at arguably the most iconic episode of the series? It's time for another 'Undeniably Great Episode of British Comedy' and this time we're looking at the episode - Kicking Bishop Brennan Up the Arse!

Dermot Morgan, remembered by his friends

As Craggy Island's idiot priest turns 25, Graham Linehan and Arthur Mathews pay tribute to the late comedy livewire who brought him to life

Twenty-five years ago today, a phenomenon burst upon our television screens. The first showing of Father Ted on Channel 4 brought us the strange and very, very funny world of Craggy Island and its trio of priests with their housekeeper.