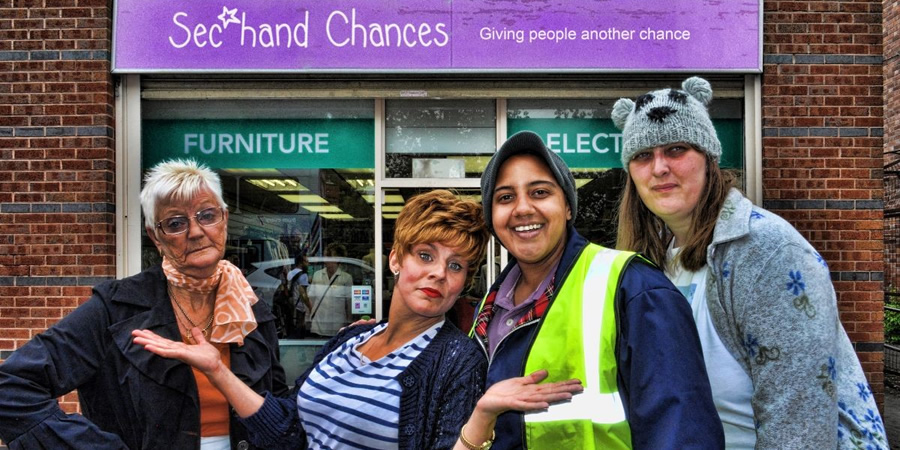 Mockumentary following the manager of a charity shop in Nottingham

You may recognise Sue from the runways of Paris and Milan during her stint as a fashion stylist to the stars, now you are most likely to know her for putting Bulwell, the shopping capital of Nottingham, on the fashion map.

It's not all been sequins and sparkles for our Sue. Her former years spent as landlady at The Moon And Stars pub left her heartbroken, ashamed and reaching the lowest point in her life after being betrayed by her ex-husband who robbed her of her savings.

It is no surprise that Sue has become a local celebrity given that her father was the "Bulwell Market King" who had an ability "to sell anything to anyone". With a keen eye for collectable cocks, Sue is truly a force to be reckoned with.

Outrageous, dysfunctional and a star in the making, back in 2014, Sue invited a student filmmaker for a behind the scenes look at what it's like to be a local celebrity and manage one of the most successful charity shops in Bulwell. The footage has never been seen before, until now.

Come on in and enjoy Sue's original soundtrack of vintage 80's and early 90's pop songs.

The six-part series follows Charity Shop Sue behind the scenes of her much-loved shop. It will see Sue's ambitious attempts to raise the profile of the shop with the help of fellow volunteers Vera, Viki and Kersch.

Along with her eclectic ensemble of staff, Sue leads her charity mission like no other; never missing the chance to share a sneaky video with her growing army of fans.

Sue's efforts to win a refurb for the shop are continually sabotaged by local troublemakers, missing dogs and demanding customers. Will Sec*hand Chances survive?