The production enjoyed a sell-out tour in 2018 and 2019, and has now been released for rent in aid of NHS cancer charity The Christie.

Written by and starring Craig Cash and Phil Mealey, the comedy is set in mythical Stockport pub The Grapes. The actors who feature in the TV series and live show have come together to "promote the download for a local charity that is close to their hearts".

It is available now via the Vimeo platform, at a price of £4.99 per 72-hour rental window, running for 1 hour and 50 minutes.

Mealey, who also plays cheeky chappy Duffy, says: "The film has been edited from the arena footage of the tour, and while this might have created a minor compromise on production values, it has more than made up for this in laughs and captures the atmosphere and joy of this live show experience wonderfully."

The Christie charity supports the work of The Christie NHS Foundation Trust, a specialist NHS trust that is one of the leading cancer centres across Europe, based in Manchester and serving the people of the north and north west of England.

Phil Mealey says: "Most of us will have come across The Christie, whether that be through a family member, friend or colleague being treated. And we all know what an amazing place it is and what incredible work it does. It was an easy decision for us to support The Christie and we really hope the download is a huge success."

Louise Stimson, Head of fundraising at The Christie charity, said: "The cast has shared a real gift with the charity in giving us the proceeds from this download. Both committed fans and new converts to this hilarious comedy will really enjoy the show while doing good by raising much needed funds for The Christie charity - a wonderful combination."

Early Doors Live was produced and is distributed by Phil McIntyre Entertainments. Both series of the original BBC sitcom are also available on DVD.

All twelve episodes of Early Doors are in this two disc box set. It's a gentle yet compelling story of life, love, loneliness and blocked urinals. 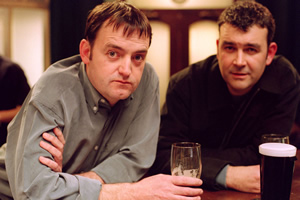