The venue explains: "Early in 2019, Komedia Bath and Saddlegoose Comedy teamed up to search for the best new comic talent that Bath and the surrounding area had to offer... and we've only gone and found him!

"After winning his heat in early January, Gareth won over the audience and judges alike at the Grand Final on Sunday 10 February, with his brand of 'did he really just say that?!' humour. He takes home the glorious, and ever so slightly homemade, Golden Launchpad Trophy (just don't ask him what he's going to use it for...)" 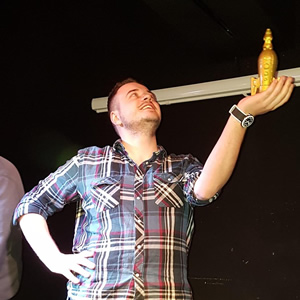 Talking about their winner's background, Komedia explain: "After being 'blackmailed' into joining the Idle Playthings back in 2013, Gareth started his stand-up career.

"Taking a hiatus after uni, he's back in full force still sharing dating app mishaps, stories of orca-based confusion and teaching the audience how to cope with a mid-life crisis at 24.

"Not only does he look great in plaid, but you might catch him in sequins under his drag alter-ego Candy Flipp - the hostess, packing the mostess, of Bella Cielo at the Bell Inn, Bath."

The Komedia Bath Comedy Launchpad Competition 2019, which was sponsored by Hall & Woodhouse, received over 100 entrants, with 24 acts competing in the heats. The other 5 acts in the final were Fran Kissling, Jaro Vee, Alice India, Eliza Fraser and Jessie Nixon.

As part of his prize, Gareth will receive a paid gig on the main stage at Komedia Bath as part of a Krater Comedy Club Show in 2019.