Putting burlesque to its originally intended purpose, Lolly Jones' unique style of satire fuses lip sync to political speeches with clowning and cabaret. Embodying a host of Europe's forerunning female politicians, I Believe In Merkels is the sultry, silly and subversive send-up of Brexit shambles that we all desperately need. She'll be performing it at Edinburgh Fringe Festival this August.

So - the million-dollar question, what's going to become of us: Leave or Remain?

Leave. Obviously. But 'when' is anybody's guess. In my family, I'm the only one who voted Remain so it's not so easy to get lost in my liberal echo chamber. I'm going to lip sync my mum in this show as an attempt to understand her anti-EU stance. She makes some good points, particularly on democracy. When I play her, she'll be talking about Hedgehog Crisps. Apparently, the EU wouldn't let a British crisp company name their flavours after our favourite garden rodent. If I'd known that in 2016, I might have voted differently. 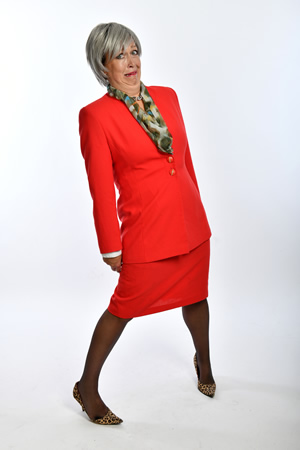 Who is the most stylish female politician? ONLY JOKING - what aggravates you most about media coverage of women in politics?

They are asked about children constantly. If they don't have them, they are thought to be cold and impersonal. And Theresa has always been compared to Margaret Thatcher - she has more in common with a bowl of ham. It's lazy. Although props to Theresa for trying to lower her voice in the same way and taking tough, immovable stances on nuclear warfare and immigration. It was kind of convincing. The bottom lip always gives it away though... and the sideways glances, hunched shoulders and stuttering. It's been fascinating to recreate on stage and it's perfectly at odds to when she performs a striptease.

Audiences today don't necessarily associate burlesque with satire. Tell us about the medium's long slow dance with politics and any satirical cabaret heroes you may have.

The word burlesque is from the Italian 'burla' which means to mock. And whilst many people thought that burlesque began with Dita von Tesse, its roots are in ancient Greece - a by-product of the Romans' penchant for social criticism. It can be seen in Aristophanes: embellished anecdotes and female characters withholding sex - the first elements of 'tease'. I follow a burlesque dancer on Instagram called Teasy Roosevelt and her act looks amazing. It is a mix of USA flags, moustaches and 'F&!k Trump' written on her bum cheeks. I hope she plays over here soon. The edgier and darker the better.

Imagine the cabinet transforms into a cabaret for one night only. Who would you like to see performing which acts?

Obviously, Gove doing a snake dance. He would be the snake on Theresa's shoulders. Boris doing a 'half and half'. The Trump hater and the Trump lover or the Pro-EU and Eurosceptic. Which one is he? Both at the same time with the end goal of furthering his career. I'd like to see Phillip Hammond in suspenders, having to sing for his supper.

Who of the politicians you impersonate would you most like to see in the front row of your show this Fringe?

I would love for Nicola Sturgeon to come to my show. I think she could take it. I lip sync her taking the piss out of the Tories in a late night, cabaret dive. Her jibes are structured like standard jokes with a couple of toppers, so I've set it to slow jazz and canned laughter. She then does a striptease whilst slagging off Jeremy Corbyn. I think she'd be into it - especially the bright yellow nipple tassels and Pound Shop wig.