Diana Dinerman is performing her autobiographical feminist comedy, DETOUR: A Show About Changing Your Mind, at the Edinburgh Fringe. The LA-based writer, comedian and actor answers five questions here...

What's the best 'bad' decision you have ever made?

Unless you count eating fish on a plane, there are no bad decisions, just decisions.

I've made many questionable decisions in my life, but the best "bad" decision was returning the humidifier (come to DETOUR and you'll understand why).

Also, not suing the pharmacy that accidentally prescribed an anti-psychotic drug instead of the medicine I was supposed to take. I had a dance rehearsal one night and I couldn't figure out why I had no energy and could barely lift my limbs. Turns out I was accidentally given a drug that helps people with psychosis. I, myself, don't have mania, so it was a wild 48 hours of being completely subdued. I should've sued them because that's what we do in America, but not suing them saved me a lot of time and kept my pre-existing conditions top secret- also a best practice in America. 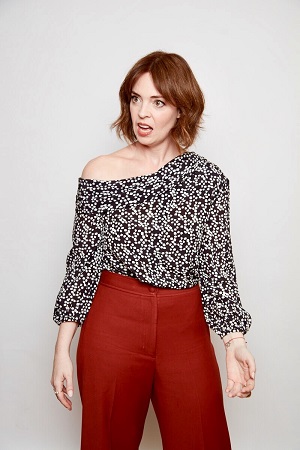 How do you know when to quit and when to persevere?

Quit when it's not going to get better. That's why I've never been able to quit stand-up comedy. If you keep doing it, it gets better. What a trap.

We're so programmed to blame ourselves for being not good enough, you've got to have a very clear sense of self to know when it's the thing (job, relationship, etc.) and when it's you.

Detour is your first Fringe show. Are you anticipating a difference between US and UK sense of humour?

Whatever you create takes on characteristics of the environment in which it's made. DETOUR is like wine that way; it tastes like its surroundings. The show is a bit dry, a bit sweet, a bit surprising, and there's a nice finish.

Because DETOUR is set in Los Angeles, there are LA-specific references and it has an American feel to it. It will be interesting to see who catches that feel. If you've travelled to or lived in LA, there's a strangeness and a ridiculousness to the place and without a sense of humour, you'll rot from the inside without noticing. LA is a sunlit mortuary. But, with a sense of humour, it's a lovely place to live.

It's an amazing opportunity to be an artist who can travel their work - no matter the response, I always grow from that exposure. There is an enormous difference in our senses of humour and where that humour is rooted. The witty, self-effacing, intellectual humour will appeal to UK audiences.

I'm also a Jewish woman and humour about this part of my identity is common in LA because the Jewish community is so large. UK audiences don't have the same reference points for Jewish American identity, though Jewish people being funny isn't new.

I am looking forward to seeing what lands for them because my Jewishness is an intrinsic part of my identity as a performer, and it's not something I've talked a lot about in my stand-up, but I do talk about it in DETOUR.

We hear you're a fan of Vipassana meditation - what does it do for you?

It's a practice I have; I don't know if I'd call myself a fan. Can you be a fan of Buddhism? Sounds like attachment, and we meditate to decrease that.

The meditation I practice has afforded me more balance. When you're an entertainer, there's a lot of distraction. It's about 90% noise and 10% content. The amount of noise around us is extraordinary. If you don't have a clear channel to your own voice, you can become a blend of the strongest opinions around you. Vipassana helps me quiet the noise and connect to myself.

When you're a solo artist, your voice is your work. That's what pulls people toward you. Without a connection to it, you're an imitation. Vipassana gives me the discipline and the connection to myself that I need to do my job with the passion and alacrity it requires. 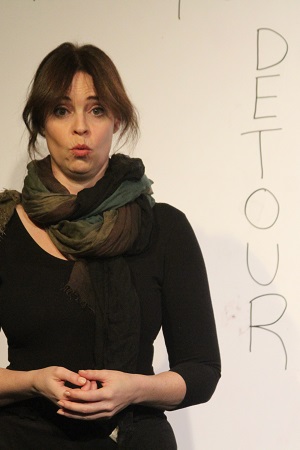 You forged your career first as a stand-up, and now you're moving into theatre (albeit with strong elements of comedy) - what have you found to be the biggest challenges with this change in medium, and what has been the most fun?

When funny people get serious, it's satisfying for both the audience and the performer. That DETOUR is a story being told by a comedian makes it more balanced because you have comedy peppered throughout a story about a person who is changing.

There's a narrative arc and a personal transformation in a solo show, which isn't required for stand-up. It's been satisfying to stretch my legs and express more than my comedic point of view. And, I get to tell the story using my whole body; I'm not shackled to a microphone. I can use jokes, storytelling, dance, and visual elements to pull the audience in.

Theatre is so human, so based in connection and shared experience, writing a solo show gave me an opportunity to have a different kind of conversation with my audience - one where I get to show the parts of me that aren't funny, that are also sad and confused and uncomfortable.

The challenging part of working on a solo show is how vulnerable it is - I don't get to use jokes as a safety net. As a stand-up, I lean forward. There's authority in that posture in that I appear to have the answers. In DETOUR, I must sustain emotional vulnerability. I'm asking questions of myself and the world in this show - what if I don't have all the answers? What if I was wrong about my life? Adjusting to not having all the answers, not putting a funny spin on everything, has been challenging and rewarding. It's given me and the audience more to talk about after the show and that's my favourite part.