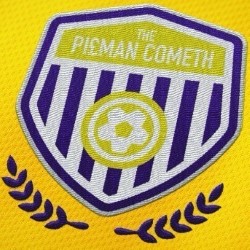 Play performed on the following days in August 2018...

Alan Ledger didn't want the limelight and he didn't want the praise. Unfortunately, he often got one, but hardly ever got the other. Join Alan on his journey through the murky, monetary mayhem lurking behind the scenes of Scottish football, as he asks: 'Who is football for? Why do fans insist on pies? What kind of oddbod would put money into a football club?' All these questions and more are mostly ignored in this hilarious comedy written by Bryan Jackson and David Belcher, and directed by Frank Miller.