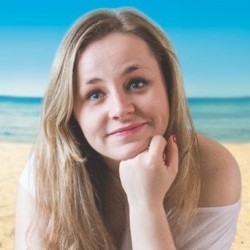 88: Just The Tonic at the Caves
Room: Just the Fancy Room

In 2010, the island of Herm (the Channel Islands' smallest island) declared a state of emergency. Helicopters went up. Divers went down. It was all Sasha's fault. A stand-up show about how Sasha brought a part of the world to a halt. A tale of an engagement, a missing person and a near catastrophe which explores love, loss and the pitfalls of drinking. Sasha's shows have transferred to Soho Theatre and Soho Playhouse in New York. 'Rife with cheeky humour... upfront and witty' **** (BroadwayBaby.com). 'Genuinely fresh' **** (Scotsman).