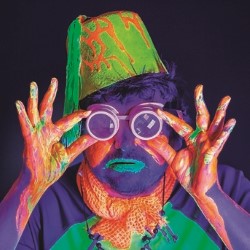 2016 Malcolm Hardee award winner for Comic Originality - dare you board the Twonkeyverse? A fancy new adventure featuring a tiny Al Capone, a mysterious package and a sexual dance that leads us off a cliff. We travel to the belly button of Europe to unlock a safety deposit box. Why is Mr Trombone so sad and what's it like to work as a gigolo? 'A crazy, wonderful performer' **** (Kate Copstick, Scotsman). 'The plan is written on a teapot' **** (BroadwayBaby.com). 'An hour of utter chaos sit back and enjoy the ride' **** (ShortCom.co.uk).

Paul Vickers' alter-ego is still brilliantly bizarre, but this year's show is actually pretty darn coherent, with some corking songs. The former indie-rocker and his cohorts create some genuinely interesting music and effects to soundtrack Twonkey's emotional journey.