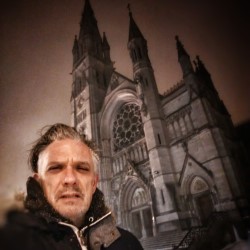 Joe Rooney is best known for his role in Father Ted as the rebel priest Father Damo. He has been performing stand-up for the last two decades from Moscow to Milwaukee and everywhere in between... okay, not everywhere. In his first solo Edinburgh show he talks about a passive aggressive Jesus, Catholic guilt and praying for a spider, interspersed with the occasional musical interlude. He is very good but then I would say that, because I am Joe Rooney, although not necessarily because I have my doubts.