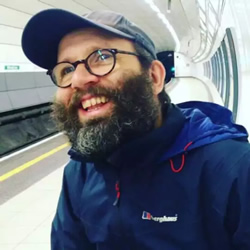 Because he's an idiot, in thrall to his own imagined past, Daniel Kitson (41) has decided to perform an unfinished show that starts at Midnight in a venue that gets debilitatingly hot and doesn't really have enough chairs. In terms of tone, the closest comparison is probably that bit in Oldboy with the corridor full of baddies and the hammer.