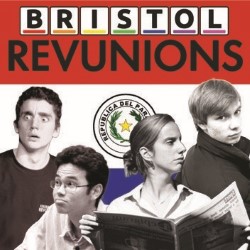 Sketch show / satire performed on the following days in August 2018...

In 1988 the treasurer of the Bristol Revunions emptied the comedy troupe's bank account and fled to Paraguay, leaving the society bankrupt and forcing the group to disband. Ten years after the society reformed, the Bristol Revunions are back at the Fringe to seek justice through comedy and tell this story. 'A first class example of what a student sketch comedy show can be' (BroadwayBaby.com). 'A comedy force to be reckoned with' ***** (ClogsComedy.Wordpress.com).