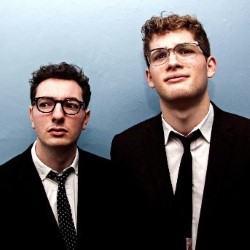 Sketch show starring Will Hall and Leo Reich performed on the following days in August 2017...

It's the opportunity every comedian dreams of. Double act Will Hall and Leo Reich have been given an hour to record their very own TV pilot. It doesn't help that Leo is drunk. Or that Will is in love with the runner. Or that the tech keeps malfunctioning. But they've got a lot of sketches to get in the can and only 60 minutes to do so. Well, 59... Slick, fast-paced sketch comedy from two Cambridge Footlights regulars that promises to be 'not just funny... but rich with a sense of self-awareness' **** (Scotsman).