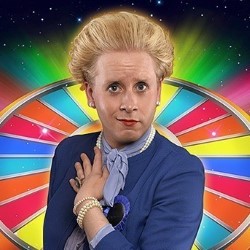 Ding dong the witch is back! Multi award-winning Fringe sensation Margaret Thatcher Queen of Soho returns with the most fabulous game show of all! Join the Iron Lady for songs, games and catchphrases as audience members compete for their golden giro cheque! 'So much fun Theresa May will probably outlaw it' (Chortle.co.uk), 'A dazzling show for the austerity generation' **** (Skinny), 'Glorious camp with political punch' ****(Times), 'Tedford's Thatcher is a real treat' **** (Scotsman), 'Nothing short of a comedy masterpiece' ***** (ThreeWeeks), 'An evening of genuinely hilarious nonsense' ***** (Attitude).