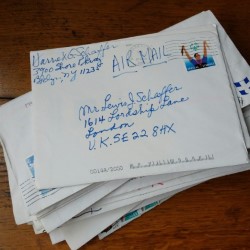 Each day the London-based New York comic will read an unopened letter from his mother, sent before she died alone in New York. 'Stands at the edge of metaphorical precipice' (R Stamp, FringeGuru.com). ***** (Scotsman). 'Compelling, unique and most of all unpredictable' (Bruce Dessau, London Evening Standard).

Lewis Schaffer is reading previously unopened letters from his late mother. Be prepared for any emotion, from anger, to guilt, to floods of tears. As each show is led by a different letter it's hard to predict how it will go on any particular day, but it's worth finding out. If you took away the humour it could be a Tate Gallery art installation, but there's plenty of laughter to mask the pain...