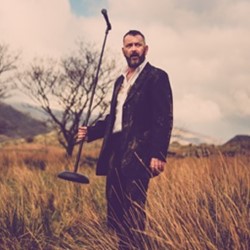 BAFTA Wales-winning comedian Tudur Owen brings his new stand-up show to Edinburgh. It's about his country, his language, hopes and fears, and there might be stuff about pissing in wetsuits. 'I sometimes think that being Welsh is very much like being Scottish' lied the fortysomething father of Welsh children. 'Often stereotyped, a bit fighty and very misunderstood' he continued while chuckling alone. Tudur's got the LL factor! Have you got the LL factor? Probably not, because it doesn't really mean anything. 'Great material, great variety, very funny and very Welsh' (BBC Wales).