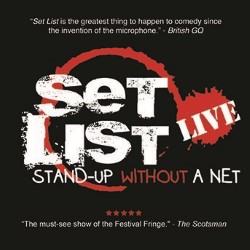 Improv performed on the following days in August 2016...

'For anyone genuinely interested in comedy and comedians, this is the must-see show of the festival' ***** (Scotsman). Fast, furious, reliably brilliant, different every night! Literally as they walk on stage, in full view of the audience, comedians are flashed a never-before-seen "set list" of topics and must instantly create a spontaneous and original new stand-up set right then and there. No existing material allowed: it's all improvised! Previous Set Listers include Trevor Noah and Robin Williams, who raved about it: youtu.be/93464gfTA50 (here is his actual bit on Sky Atlantic's TV series youtube.com/watch?v=Z6ZrNS_HwOQ).