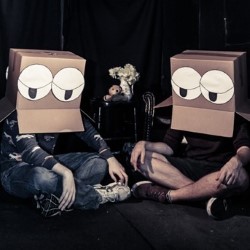 Winner - Best Comedy, Moors Theatre Awards! Leicester Square Theatre Sketch Off finalists! Sketch comedy duo, frequent enemies and occasional friends Cook and Davies find themselves in an empty room with no idea how they got there. In these bleak circumstances, the neurotic Cook and juvenile Davies create a world of bedlamite sketches. Expect high energy, slick wordplay and at least one character made of cardboard boxes as the boys fantasize, role-play and bicker in an effort to avoid insanity. They fail. 'A sketch show unlike those you've seen before' **** (BroadwayBaby.com).