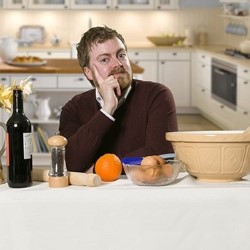 Seasoned comedian Kevin Dewsbury returns to the Edinburgh Festival to host a new TV cookery show, featuring special guests from the Fringe, exciting recipes and a few surprises. No two shows will be the same! The perfect afternoon Fringe show. Kevin has brought critically acclaimed solo comedy shows to the Edinburgh Festival Fringe in the past. Now, with the popularisation of food, he's here to combine the ingredients of comedy and cookery. There'll be something to tickle everyone's taste buds. 'A real treat of understated deadpan humour' (ThreeWeeks).