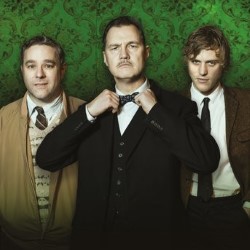 Event performed on the following days in August 2016...

Cinema screening of live performance. In his small pub in the northern English town of Oldham, Harry (David Morrissey) is something of a local celebrity. But what's the second-best hangman in England to do on the day they've abolished hanging? Following a sell-out run at London's Royal Court Theatre, Olivier and Academy Award® winner Martin McDonagh returns to the West End with Matthew Dunster's award-winning production of his deeply funny play.