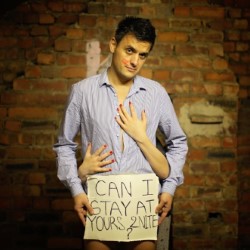 After returning from a successful debut at the 2015 Melbourne International Comedy Festival, George's life took a turn for the worse when he got dumped by both his girlfriend and his agent. In August, he left the house he shared with her and found himself homeless for the next four to five months. So he decided to do some travelling, pick up a drug habit, learn all about hostels, go to court twice and meet various interesting people along the way. Is it a mental breakdown or the best time ever?