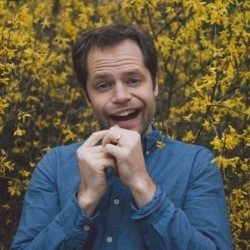 Lucky pup Elms is back chasing his tail again; he's learning about sacrifice, guilt, and, as always, love. 'As if someone has squeezed all the sweet and nice out of Stewart Lee and made a whole new comic with it' **** (Scotsman). 'A born performer' **** (List). Musical Comedian of the Year 2014. As seen in Mr Swallow, Coach Coach, and TV's Borderline.