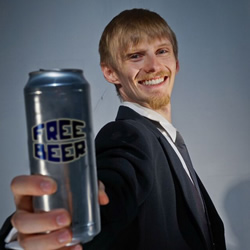 The show includes car chases, prophet cows, spirt animal foxes, and one show stopping musical number. The title is the description is a promise.

NFBGFK is a competition between three rival groups, vying to be the ones to put on their fringe show, Farmhand Joey, their own way... with Nudity, Free Beer, and Good for Kids. The audience are our investors sitting in on the first previews. Each investor has the opportunity to invest in the group they want to win. The scores will be tallied at the end of the night and prizes awarded to the winning cast and investors. The show is partially scripted and partially improvised anew each night, but NFBGFK guarantees fun for all.

NFBGFK also has an online component to let people play along from anywhere (no beer though). In the online version you will be able to vote for your favourite competitors from the comfort of your home or the convenience of your mobile device!

Are you now or have you ever been a kid? You'll love Team Good For Kids! Do you like foxy ladies? You sound like the Team Nudity type! Have you purchased anything from anywhere, ever? You'll appreciate Team Free Beer!

This is Yuffa's second year at the Fringe. Last year was the inaugural year of Yuffa Fringe. In 2014 they brought their show Victims of Influence, an original and devised piece that took a feminist perspective on the Frankenstein story, looking at what makes a woman monstrous in today's society. The Mumble gave Victims of Influence 5 Stars, saying: " This is a brilliantly executed piece of theatre, with gripping physical movements pulsating through an excellently written script." And, the Scotsman called the performance, "Energetic and committed".

The show is being performed at Venue 13, which promotes emerging and established talent at the Edinburgh Fringe. Run from Cardiff, it features work and artists from Wales, the UK and further afield, particularly the US and Canada. For the last 11 years, Venue 13 has been proud to be the Edinburgh home of CalArts (California Institute of the Arts) Festival Theatre.

Yuffa Fringe is supported by York University in Toronto, Canada and gives students and alumni the ability to bring new work to Edinburgh each year.