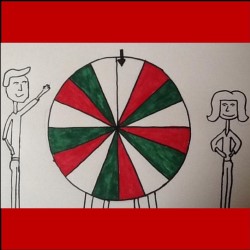 Hello. You look nice today. But no time for that. This event will go ahead no matter what happens. Power outage? The wheel will spin. Sudden outbreak of witch trials? The wheel will spin. The wheel breaking? We'll come up with something. The unstoppable quiz with a wheel. (No two shows the same, due to the very nature of the universe.)

Stephanie Laing and Paul Duncan McGarrity bring you a silly hour of silliness, with zero artistic merit, but a shockingly high volume of maltesers. This is an interactive show, so be prepared to get involved with some jousting, guess which donkey done a murder, and probably drown in the underwater round. Also, there's a big wheel with the rounds on it that Paul made, hence the name.

Stephanie ("gloriously silly, wonderfully unpretentious" Broadway Baby) and Paul ("a very tall, funny, excited child" Kate Copstick) have been performing at the Edinburgh fringe for 8 years between them. They decided to team up to write this show together because of their shared love of surreal comedy, games, shouting and maltesers.