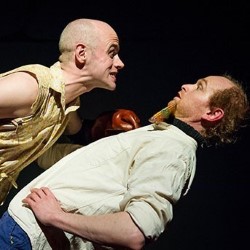 Winner - ThreeWeeks Editors' Award 2012 'Expertly performed and stupidly entertaining' (Guardian). After a sell-out world tour, Unmythable is back. All the greatest Greek myths in one show - an unforgettable blend of sketch comedy, cross-dressing, stories and songs. Prepare to be a legend. 'The energy and spirit of Monty Python, blended with a less deadpan version of Flight of the Conchords.' (The New Zealand Listener). ***** (ThreeWeeks, BroadwayBaby.com, ThePublicReviews.com).