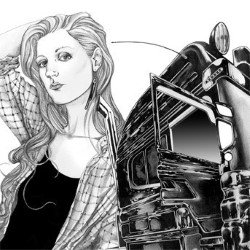 I will bring a guitar, a dead pan, one violin-t voice, a Danish accent and trucks. Please bring your tree, ears, ice and body-parts. Chairs, sounds of words, songs and in-between pauses will be provided. There will, hopefully, be a merging movement between me, the performer, the elements in the show, the room's acoustics and moisture, you and the other audience members' laughs. I'm writing this myself... so I don't think I can promise you more than that it will be some kind of a comedy show. Maybe you can tell me afterwards?

A slow-burning, Scandinavian surrealist brings her first, sound-centric solo show, Waking Up In Trees and Trucks to The Edinburgh Festival Fringe.

Her craft is a postmodern coffeehouse fusion of odd music and unsettling humour filtered through the irrational logic of a queer-feminist freedom fighter.

In her fringe debut she will entertain her audience by sliding between a humble Dane and a high-pitched wacko - putting pauses into play with one hand, while trying to control her erratic guitar with the other.

Trine Munk is a Danish woman, 33 springs old. She lives in Copenhagen, but used to live in London where started doing stand-up. Before doing comedy she was the co-founder of the group 'Queer Jihad' that published the book: Look! The Heterosexual World Order Is Breaking In To Pieces. She has lived in different Tree Houses and has been in a lot of Trucks.

A bewitching blend of the serious and the sublimely silly!