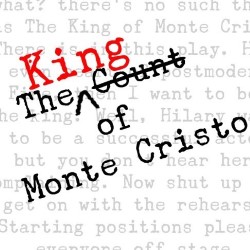 An award-winning, narcissistic writer director duo are set to stage their fifth play together. But things go wrong when the writer turns up to the first rehearsal with a completely different script. Joining them (and complicating things) are their eclectic cast - a Hollywood superstar, an actor who thinks Harold Pinter is a brand of posh paint thinner, a soap opera star with an inferiority complex, and a shy, polite and baffled first-timer. The King of Monte Cristo is a fast-paced comedy about the trials of the creative process and the temptations of success.