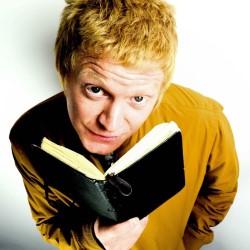 Poems and jokes about why women and wordplay are tremendous whilst god and the patriarchy and DJ Steve Wright are much less so. Is David Cameron a joke thief? Was the crucifixion really a botched attempt at auto-erotic asphyxiation? Is it possible to moonwalk in the name of feminism? Decide for yourself. 'Reminds me of John Cooper Clarke' (Lucy Porter). 'A tapestry of excellence' (Phil Kay).