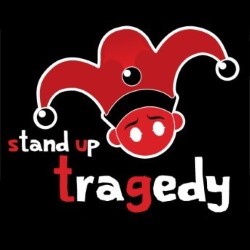 'Takes in everything from music to comedy and is characterised by an emphasis on truth' (Independent). A variety show that explores tragedy. Comedians, musicians, storytellers and more combine into a different line-up every night and on Mondays we'll even have exciting special guest hosts. You can get an idea of what we're like by listening to our podcast. Look out for other Stand-Up Tragedy productions in PBH's Free Fringe Booklet. Past SUT acts have included Josie Long, Stewart Lee, Sara Pascoe, Grace Petrie, Eddie Pepitone, Robin Ince and Rob Auton.

Stand Up Tragedy is dedicated to having multiple voices and approaches to the tragic, and we have invited some guest hosts and collaborators to help expand what we do. We have eight special editions of the show:

15th August - Tragedy Fails Better: Hosted by Varjack & Simpson, this podcast crossover with their Fail Better podcast will look at the tragic failures performers have had on and off stage.

22nd August - Tragic Violence: A showcase of the most tragic comedy that sketch group Casual Violence! have created.

23rd August - Other Tragedies: A special edition of Other Voices spoken word cabaret, where all the tragedy is delivered by people from groups we rarely hear from.