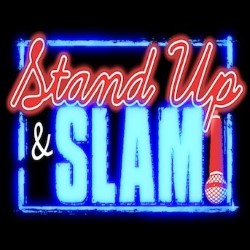 Stand-up comedy: poetry's idiot relation, right? Performance poetry: comedy's boring cousin, yes? Let's find out. Six phenomenal acts go head to head for your approval as poetry and comedy collide with unexpected and hilarious results! Each night our resident team captains are joined by the most exciting acts the festival has to offer. We're mashing up the two art forms in an epic battle of spoken word. Who wins? You decide... London's Evening Standard and Metro Comedy Pick!

Think poets are pretentious, thesaurus wielding boredom machines? Find comedians an annoying bunch far too fond of willy jokes? Ready to have your preconceptions blown away? In this unique and exciting show, the best of the UK's wordsmiths and comics go head to head for the very first time as comedy and poetry collide with hilarious and unexpected results! Come pick a side and cast your vote as six phenomenal acts from the worlds of comedy and poetry go face-to-face for your approval in three killer rounds of Stand-Up Comedy Vs Spoken Word.

After a string of sold out runs across London and around the UK, including residencies at The Comedy Café, Hackney Attic and Camden Comedy Club plus performances at Dave's Leicester Comedy Festival and the Canterbury Fringe, Stand Up & Slam! is delighted to make its Edinburgh Fringe debut!

Hosted by our resident Team Captains - you'll get any two from our gang of poets Oli Forsyth (Playwright Cornermen) & Dan Simpson (Glastonbury Festival Slam Host 2015) and comedians Rob Carter (C4's Fresh Meat, 'sweetness, maturity & charm' Chortle) & Rich Wilson ('Highly entertaining' Time Out) - each show features four guest performers doing what they do best before taking on the competition in this tongue in cheek, but also deathly serious, battle for victory. The winners? Whoever the audience decide are really, truly, the best art form on the night!