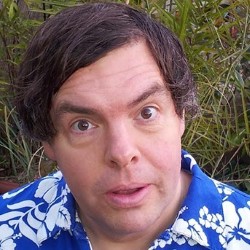 Nonsense at noon from the loveable loon, Tim Shabababa or whatever his name is. This silly man who is known for wearing a Hawaiian shirt, and for being a bit older than those who are younger than him, has won several awards including the Leicester Square competition, and was a Chortle Best Newcomer nominee. With that success, he disappeared into obscurity, mainly to create some mystery. Watch him emerge from the darkness with his debut full length show. The perfect way to start the day.